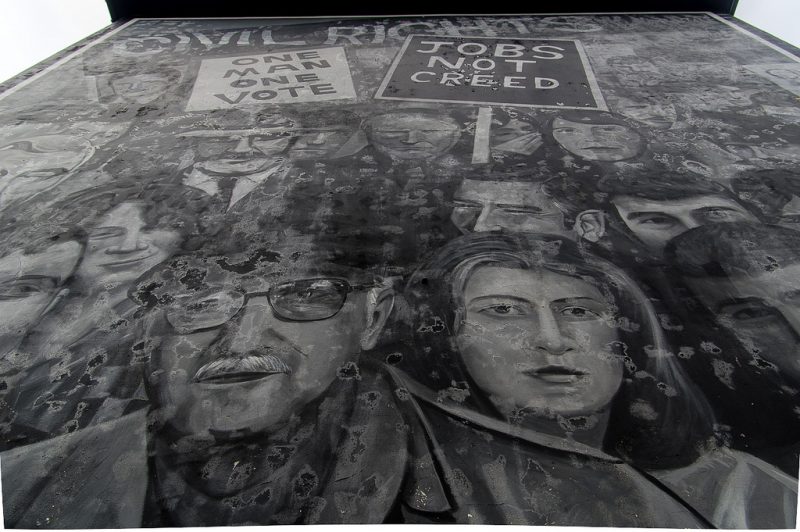 The 50th anniversary of the Civil Rights movement has seen depressingly predictable arguments about who was, and who was not, involved in the early stages of that agitation. Claims by Sinn Féin’s Declan Kearney that republicans, including the IRA, were central to the genesis of civil rights provoked outrage from veterans as diverse as Eamonn McCann (of People Before Profit), Bríd Rodgers (of the SDLP) and Marian Donnelly (of the Workers’ Party).[1] Despite their very different political positions, they were adamant that those who became the Provisional IRA had nothing to do with the Northern Ireland Civil Rights Association (NICRA) and that they were contemptuous of any such strategy.

However, a major problem with these recollections is that they are (for very understandable reasons) tied up in arguments about responsibility for the violence which emerged in the years after 1968. They are also influenced by the nationalist fear that unionist allegations about civil rights being a republican plot should not be given credence.

But looking at what was actually being said at the time complicates the picture for everyone involved in these debates. In early August 1968 for example, the Co. Derry republican and solicitor Kevin Agnew addressed the Roger Casement commemoration in Co. Antrim. In the course of his speech, Agnew asked those present for their support at the first NICRA march from Coalisland to Dungannon, which was to take place a few weeks later. Agnew stressed that ‘(if) you all go in your thousands … we will let the O’Neills and the Craigs see what we can do.’ He also ‘trusted that with the help of God they would see the end of British rule in the not too distant future. If the O’Neills and the Craigs and the others of their kind in the Stormont regime wanted to go with them, good luck to them. We can do without them here in this part of Ireland. Captain O’Neill is mistaken if he thinks any man or woman who loves Ireland is going to give loyalty to a British Queen in return for any wee job.’[2]  Agnew himself had been a member of the NICRA Executive since April 1967, though his rhetoric hardly reflects the ‘reformist’ message we are told was part of the civil rights strategy. A decade later, in 1978, Agnew addressed a rally in Derry to commemorate that city’s iconic 5 October march. There he asserted that ‘Ten years ago our battle cry was “We shall overcome”; today it is “Up the Provos”. After 1970 Agnew had become one of the early members of the Provisional movement.

Alongside Agnew in Derry in 1978 were Eamonn McCann and Michael Farrell. McCann stated that ‘there cannot be any dispute that to the fore in trying to smash British imperialism in this country is the IRA. They are the inheritors of the struggle that began in Derry city on October 5th, 1968.’ Farrell (a founder of Peoples’ Democracy) leveled most of his vitriol at the SDLP, calling them ‘carpet baggers’ and insisted too that ‘today’s struggle is a logical continuation of that begun back in ‘68’.[3] While many veterans have been critical of Sinn Féin’s recent claiming of a civil rights lineage, the politics of prominent civil rights activists have undergone changes in the decades since 1968 as well.

That republicans were involved in the civil rights movement is unquestionable. The commander of the Belfast IRA during the 1960s, Liam McMillen, was a member of the first NICRA executive. Whether their involvement reflected a clearly thought out and peaceful ‘stages’ strategy, is very much open to question.[4] During May 1967, after the establishment of NICRA, the IRA bombed two Territorial Army centres in Belfast and Lisburn. In early January 1968, they bombed the Territorial HQ on Belfast’s Malone Road. During July that year, the IRA carried out a grenade attack on an RUC patrol in the Lower Falls area of Belfast. There were also a number of attacks on economic and political targets in southern Ireland. These were part of what McMillen referred to as ‘a happy blend of political agitation and military activity.’[5] Seen through the lens of the war that emerged after 1970 these seem very small scale, but in fact they were the cause of much worry at an official level in Dublin.[6] Republicans at the time clearly saw no contradiction between supporting civil rights demands and carrying out armed actions. Indeed, the IRA’s Chief of Staff Cathal Goulding stated during February 1969 that ‘if the civil rights movement fails there will be no answer other than the answer we have always preached. Everyone will realize it and all constitutional methods will go overboard’.[7]

Of course, republicans were only one element of the civil rights movement (though at local level often an important one) and what they were saying was not necessarily heard or heeded by others. What strikes you on reading reports of marches and rallies through the period is the breadth of nationalist involvement and the diversity of the demands being advanced. From the platform of the very first march, Austin Currie of the Nationalist party denounced ‘Orange bigots’, while Gerry Fitt MP described RUC officers as ‘black bastards’ and defied the police to lay ‘a hand on one man, woman or child in this crowd to-night.’[8] This rhetoric was not unusual and neither was the fact that marchers sang both ‘We Shall Overcome’ and ‘A Nation Once Again.’ Even a cursory glance at the Irish News and the regional press from August 1968 onwards throws up reports of meetings and arguments that have been largely unexplored (with the exception of Niall Ó Dochartaigh’s excellent study of Derry). What is clear is that the movement in Derry was different to that in Belfast, agitation in Newry different to that in Armagh and so on. Investigating what was actually being said at time might in fact confirm Declan Kearney’s suggestion that the ‘the history of the Civil Rights Movement demonstrates that it had multiple parents and many children’.[9] Given the importance of the memory of civil rights to the debates about the causes of the conflict after 1970, it is vital we get a sense of the politics of the time rather than viewing them through the polemics of today.

Brian is a graduate of Trinity College Dublin. He has lectured in history at St. Patrick’s College, Drumcondra, the National University of Ireland: Maynooth, Trinity College Dublin, the University of Liverpool, Queens University Belfast, University College Dublin, the Mater Dei Institute of Education and the National College of Ireland. Brian was also Historian in Residence at Dublin City Library and Archives from July-August 2015 researching the 1916 exhibition ‘Citizens in Conflict’. He was involved in collecting oral histories as part of the No. 14 Henrietta Street Dublin Tenement Museum project and was also chief researcher on the UCD Archives project ‘The Finest Men Alive’ and was Area Historian for Dublin City Council and Archives, based at Pearse Street, during 2017. Currently Brian is working on the AHRC funded project ‘A Global History of the Irish Revolution, 1916-1923′ at the University of Edinburgh. Brian’s latest book ‘The Impact of the Troubles on the Republic of Ireland, 1968-79: Boiling Volcano? is now widely available.