It has been a busy time for those following the news on Northern Ireland and the ‘Troubles’. In the space of seven days we saw the death of Willie Frazer, a controversial victim’s campaigner, Conservative leadership hopefuls took to the hustings in Belfast, Colum Eastwood was referred to the Northern Ireland’s attorney general over claims he prejudiced the upcoming Bloody Sunday trial, and the Northern Ireland Office released their analysis of the recent legacy consultation. Each of these issues deserve their own post but I would like to focus on the latter. As researchers of the ‘Troubles’ it is important that we consider the implications of these consultations. We deal every day with the legacy of the ‘Troubles’ in our work – either trying to understand what happened or what the effects of it have been- thus it is vital that we engage with this new material as we do with any other.

Attempts to deal with the past in Northern Ireland and associated commentary continue as they have since the beginning of the peace process.[1] The opening statement of this report sets the scene well: ‘It has been clear for many years that the current system is not working well for anyone and that we need to find a better way to address our past’.[2] That said, and for all of Karen Bradley’s failings as Northern Ireland Secretary, the core principles of the consultation are sound:

In particular the consultancy sought advice and opinion on the following institutions:

In short, these institutions could be seen to be concerned with formal justice, personal closure, collective understanding, and prevention and oversight, respectively. The potential of a new and institutionalised Oral History Archive for those researching the ‘Troubles’ would be great. As the discussions on this blog have made clear, we all seem to have opinions on the topic, whether it is about reaching previous under researched groups, the role of the researcher, how the oral history/interview process can change a researcher’s practice or orientation, or the value of interviews in the first place. 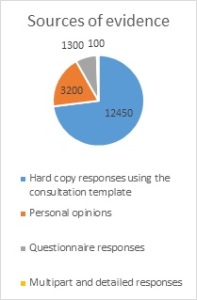 Based on these criteria and proposed institutions, the consultancy received an impressive 17,000 written responses, the style of which are reproduced here (The figure does not add up to a complete 17000 but it reflects the information contained within the report). While the report does not detail the sources of evidence in great depth, as Newbery has  highlighted, it does present a relatively wide ranging consultation.

Throughout the report there are some thought-provoking ideas. Of particular interest, I think, is the apparent transition away from seeking justice and turning to the pursuit of truth and information. Although, this should probably be approached with caution.[3] However, some of the responses concerning the difference between pre- and post-1998 crimes are interesting and suggestions that families should have a voice as to who investigates their cases holds promise. Although this could also be another potential area of division if one group of victims and their families champion one institution and others respond in kind. This is hinted at in part C of the report: ‘There were concerns that investigations may be unfairly weighted against former members of the security forces, on the basis of the proposal that the HIU investigate all cases involving the State, while excluding terrorist cases previously investigated by the HET’.[4] Within the section relating to the HUI there is also increased maturity about the process as many of the responses sought to balance the needs of Northern Ireland with other areas, rather than seeking localised solutions: ‘Many of the questionnaire responses argued that, as victims from Great Britain and Ireland (and Europe), and injured victims, would not be within the remit of the HIU, the proposals could not be considered to be truly victim-centred’.[5]

Another interesting point, I think, is the question around amnesty and a statute of limitations for security forces personnel. We have heard a lot recently about whether or not Conservative politicians support amnesty action for former service personnel, but it is interesting that just like the Police Federation have stated previously, there is no real support for an amnesty by the people of Northern Ireland. That ‘many were clear that victims, survivors and families are entitled to pursue criminal justice outcomes and such a move could risk progress towards reconciliation. There was a strong sense that the new mechanisms must be fair and not favour any particular group’.[6]

There is also the ever-present question of funding associated with the proposals in the report.  Given the uncertainty surrounding Brexit and the ongoing costs of programmes such as RHI, how much we can hope these institutions to deliver will need to be carefully considered. Some suggest that Westminster should cover the costs, but that seems unlikely. The problem with these initiatives is likely to remain the same as it has been in the past: ‘The Government will work closely with a newly restored Executive – or, in the absence of an Executive, the NI parties – to discuss the key issues raised and to agree the way forward’. Without a restored executive, or one restored on the same lines as before, it is likely that progress on this front will remain limited.

So, what does all of this mean for those of us who are continue to research and write within the context of the ‘Troubles’? With a relatively calm 11th/12th of July celebration behind us and Westminster based legislation paving the way for social equality in Northern Ireland, provided the Executive remains closed, we may be witnessing a shift towards ‘normal’ in Northern Ireland. For me, what these events do is raise the profile of studies into Northern Ireland generally, but also the ‘Troubles’ more broadly. We cannot explain the importance of these recent events, such as the situation in Stormont, the importance of campaigners on both sides of the cultural divide, or the potential benefits and consequences of legacy consultations without an understanding of what has come first. Even at times of perceived progress or as we move further and further from the events of the ‘Troubles’, research into  the past will still be needed to contextualise and inform the events of today.

[1] Hamber, Brandon, and Gráinne Kelly. “Practice, power and inertia: personal narrative, archives and dealing with the past in Northern Ireland.” Journal of Human Rights Practice 8, no. 1 (2016): 25-44; Brewer, John D., and Bernadette C. Hayes. “Victimhood and attitudes towards dealing with the legacy of a violent past: Northern Ireland as a case study.” The British Journal of Politics and International Relations 17, no. 3 (2015): 512-530.

[2] ADDRESSING THE LEGACY OF NORTHERN IRELAND’S PAST Analysis of the consultation responses p.1.

[4] ADDRESSING THE LEGACY OF NORTHERN IRELAND’S PAST Analysis of the consultation responses p.16.

Patrick Finnegan is a Teaching Fellow in Strategic Studies at the University of Reading and is one of the teaching staff on the Army Higher Education Pathway. His research to date has focused on the development of combat effectiveness and professionalism within insurgent/terror groups particularly the Provisional IRA, in an attempt to demonstrate the applicability of military cohesion to non-state armed forces.