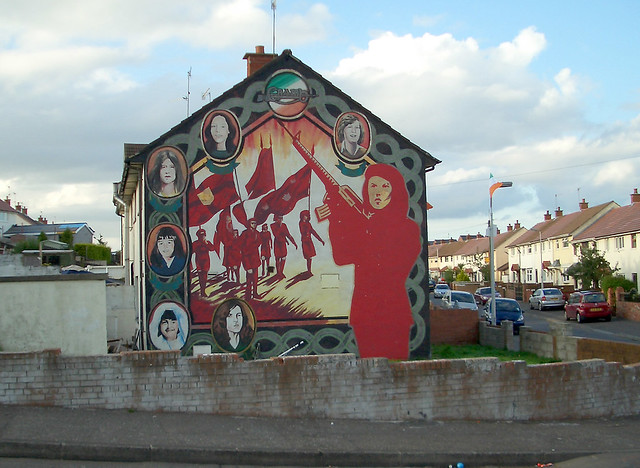 The recent RTÉ screening of the I, Dolours documentary, directed by Maurice Sweeney, received much media attention in Ireland and was reviewed by several national newspapers, including the Irish Times, Irish Independent, and Irish Mirror. The documentary is, indeed, a gripping, and at times disturbing, insight into the history of the Northern Ireland ‘Troubles’, and into the mind of arguably one of its main protagonists. The public reaction to the documentary provides important challenges for those writing the history of the ‘Troubles’.

I have researched Irish republican women, as I described in a previous article for this blog. Thus, unsurprisingly, many friend and colleagues have mentioned this new documentary about Provisional IRA Volunteer and outspoken critic of the peace process Dolours Price to me. I was led to believe that almost everyone in Ireland had watched it? And, for many this was the first time they had seen (or read) the testimony of a woman involved in paramilitary activity during the conflict.

This explains some of the terms used to describe Dolours Price and her testimony to me; they ranged from ‘hard-line’ and ‘extreme’ to ‘soulless’, ‘mental’, and ‘psychopath’. For most, her account of the disappearance of Jean McConville was particularly disturbing; people were genuinely shocked by what she said. While acknowledging that Price was at the time of the interview struggling to cope with her past, suffering from PTSD, as many other former actors of the conflict, the refusal to condemn the killing of Jean McConville stuck out as one of the most shocking scenes.[1] The reactions to her account reflect two key challenges for researchers: countering the prevailing gender stereotypes and understanding the individual choices for political violence.

The documentary is based on interviews conducted by renowned journalist Ed Moloney; also the lead researcher of the ill-fated Boston College Oral History Project. In 2010, he published a volume containing the testimonies of two participants: Belfast IRA man Brendan Hughes and the loyalist PUP founder David Ervine. In essence, the content of Hughes’ interpretation of the events surrounding the disappearance of Jean McConville from her Divis flat in front of her nine children, her transport south of the border, and the subsequent killing and burying on a beach in Co Louth is almost identical to the interpretation provided by Price in I, Dolours.

While the publication of ‘Voices from the Graves’ also received considerable media attention, including front-page coverage over several days in the Irish News, people and commentators discussed the content of the interviews rather than how they were made. This stands in stark contrast to the public dismay and outcry at Dolours interview: how could a woman feel so little remorse for what she did. Hence, if she doesn’t feel sorry for the disappearance of McConville and apologises, she must be a psychopath.

This reaction reflects the prevailing gender stereotypes linked to activism during the Northern Ireland conflict. These gender stereotypes existed in the media at the time, in coverage of the sisters’ arrest for the Old Bailey bombing in March 1973, and in dire warnings about the use of women as ‘honey traps’. However, they have been allowed to continue to influence how we understand female republicans by scholars’ decade-long negligence of women in (Northern) Irish paramilitary organisations. In the early 1980s, Margaret Ward broke ground with her study of women activism in Ireland in the early 20th century. Her book, Unmanageable revolutionaries, set the research agenda for the following decades and still does.[2] Her seminal work, however, stretches only until the 1940s; thus, militant women activism after 1945 remained under the radar of researchers.

In the past decade, several important publications have contributed to closing this research gap on republican women as paramilitary activists during the ‘Troubles’; among those are the works of Miranda Alison, Sikata Banerjee, Tara Keenan-Thomson, Theresa O’Keefe, Azrini Wahidin, and most recently Niall Gilmartin, but this remains an under-developed corner of the field.[3] There exists an even wider gap in the research of loyalist women, an area almost entirely unresearched.[4]

As a result of this, merely a handful of prominent women were singled out by writers, who portray them as the exceptions, while overlooking the vast majority of women activists in republican organisations. The German book by Cologne-based former journalist Marianna Quoirin-Wichert is one example. Quoirin-Wichert devotes separate chapters to distinct hard-line republican women such as Marian and Dolours Price, Rose Dugdale, and Josephine Hayden. Other women singled out as exceptional republicans by other writers are Mairéad Farrell, Máire Drumm, Ella O’Dwyer, or Martina Anderson.

There is a widespread myth, that when the male-only Provisional IRA Army Council passed a resolution to accept women into the PIRA in September 1971, the Price sisters Marian and Dolours, opposing the secondary role of the women’s organisation Cumann na mBan in the Provisional movement, joined as the first two female volunteers.[5] In fact, Marian and Dolours were among a group of three young women who applied to join their local PIRA unit in West Belfast. Several women were to follow serving their movement on all levels; to be sure, they undertook the same paramilitary and non-paramilitary activities as men from the mid-1970s onward. While this did not make women equal members of the Provisionals, it made Dolours one of many women who were actively involved in paramilitary activities. As such, these women showed the same persuasion to the republican struggle as men did.

The testimonies included in I, Dolours… reflect this loyal conviction to the republican struggle rather than the words of a psychopath. In his most recent book, Richard English reminds us that ‘despite the doubts of some, a persuasive body of scholarly literature now suggests that those who engage in and support terrorism tend to display the same levels of rationality as do other people.’[6]

This brings me to my second thought about the psychopath-comment. Dolours and her sister Marian grew up in a republican household in the nationalist neighbourhood Andersonstown in West Belfast. They were reportedly good at school; the sisters had a bright future ahead of them. When the Civil Rights Movement emerged, they became active, joining the peaceful People’s Democracy march from Belfast to Derry in January 1969. The attack on the march by loyalist protesters at Burntollet was a life-changing event for the sisters, which ultimately led them to join the PIRA.

In a recent article, Lorenzo Bosi and Niall Ó Dochartaigh explain that the identity rather than ideology was the main recruitment factor into the PIRA in the early 1970s. They argue that ‘that those who joined the Provisional IRA between 1969 and 1972 did so in order to respond to a need for action by a northern nationalist community that stemmed from a perceived, alleged or actual, sense of second-class citizenship.’[7]

This ‘need for action’ resulted in the recruitment of Dolours Price into the PIRA. For these recruits, joining the PIRA meant joining an army and following orders. For them, this was a necessity to fight for their cause. It needs to be highlighted that loyalist and republican members of paramilitary organisations considered themselves as soldiers; being a soldier and following military orders does not make you a psychopath. So by sticking to this label, allowing it to influence what aspects of the ‘Troubles’ we research, we risk becoming blind to the nuances that women represent in their paramilitary organisations. On the contrary, as I outline in an article for the magazine Merkur, published earlier this year, these were ordinary people who did extraordinary things during exceptional times.[8]

This blog post intends to shed light on two key issues, which reactions to the I, Dolours… documentary have illuminated. These are, first, the still under-researched role of republican and loyalist women in paramilitary organisations in Ireland and, second, the recruitment factors into and life in militant organisations. Investigating this will reveal that Dolours Price was not a ‘psychopath’ but a young woman who grew up in a particular place during a particular time, but will also give researchers a unique insight into the motivations behind individual members of the PIRA. We should make it our task, therefore, to research these two fields further to re-balance the gender history of the ‘Troubles’.

[1] Adrien Grounds & Ruth Jamieson, ‘No sense of an ending: Researching the experience of imprisonment and release among Republican ex-prisoners’, Theoretical Criminology 7(3), 2003, pp. 347-362.

Dieter Reinisch teaches history, international relations and gender studies. He holds a PhD from the European University Institute and is an editorial board member of ‘Studi irlandesi’ (Florence University Press). He is currently a postdoctoral researcher at the Institute for Social Movements, Ruhr-University Bochum; in October, he will join the Institute of Advanced Study, Central European University. He blogs on www.ofrecklessnessandwater.com and tweets on @ReinischDieter.