Writing on a wall is always political’. So writes Adam Turkington, organiser of  Belfast’s annual Hit the North street art festival. One of the attractions of the 2019 event was an image of Lyra McKee, who was murdered by dissident republicans that April. The mural is accompanied by text from a letter documenting McKee’s struggles as a gay teenager in Northern Ireland. Seemingly less political, the side of Badger’s Bar in Derry boasts a large portrait of the female protagonists of Lisa McGee’s popular sit-com Derry Girls. Both images are examples of the value of public art as an expression of Northern Irish culture and identity post-conflict, and the increasingly central standing women occupy within this. 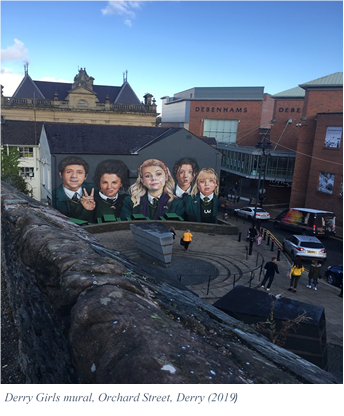 Northern Ireland murals have been the subject of much scholarly and popular attention. Like the majority of writing on the ‘Troubles’, these works have traditionally served to masculinise the conflict, which has been memorialised in terms of male actions and solutions. Both traditions are preoccupied with their own, highly gendered, versions of history, to which masculinity and violence are central. When women have been included in this visual culture, they are portrayed using narrow and prescriptive gendered representations.

The gendered imbalance in murals results from emphasis on combatants over civilians. Women are idealised not as the perpetrators, but the victims of violence, grieving for the loss of their, typically male, loved ones.  For example, the large Mná na hÉireann mural in the Bogside features images of weeping female relatives standing over a coffin draped in the Irish tricolour.[1] Another features a young mother tending to her infant  whilst looking back at the Free Derry corner, silhouettes of marchers and washing on the line. Dating from 2015, this is clearly a revisionist interpretation that seeks to place the mother and child deliberately in the foreground of the image, countering the typical emphasis on gunmen.

The nation itself is often feminised to invoke defence of the mother country. Within the republican tradition, a woman represents an allegory of the nation through Mother Ireland.[2] Unionists similarly use the female figure of Britannia or images of royal women within the iconography of their murals. For example, the 50th anniversary of Queen Elizabeth II’s coronation was depicted in a 2003 mural at Bond’s Place in Derry, whilst other unionist housing estates abound with images of Princess Diana.

When represented, female combatants uphold strict gendered ideals in both communities. Republican women have been deliberately rewritten into a purposeful legacy since the early 1980s, when Sinn Féin began to embrace a feminist agenda. The imposing Mná na hÉireann mural in the Bogside includes Markievicz carrying a Cumann na mBan flag alongside Ethel Lynch carrying a Derry IRA flag in the 1970s. They are accompanied by figures from 1798 and the Robert Emmet era, as well as twentieth-century images of the Armagh protest and ‘hen patrols’, where women raised a dustbin alarm upon the arrival of security forces. These depictions uphold an artificial ideal of equality between male and female combatants. A ‘Saoradh’ mural at the Ardoyne junction with Havana Gardens, aiming at recruitment to the contemporary movement, celebrates and more or less equates the ‘men and women of violence’.

Republican murals also depict female contribution to the prison struggle. The Mná na hÉireann mural in the Bogside features Mary Nelis’s protest outside Bishop Edward Daly’s residence against perceived church apathy towards the withdrawal of political status. The portrait is based on an iconic image of the prisons protest in the late 1970s, in which three women bear placards which read ‘Do you care?’. Commemoration of the Armagh women’s prison struggle takes place alongside male equivalents.

Though women played a lesser role in Loyalist campaigns, the murals of this tradition do selectively commemorate this contribution.  A 2011 mural at Enfield Street in Belfast showed a collage of ‘women through the ages’, including images of Queen Victoria, the Solemn League and Covenant and nurses in World War Two. Such nostalgia projects effectively address historical themes without directly engaging with the recent conflict.

No Loyalist mural features a female combatant in a paramilitary setting. There are, however, examples of female capacity for defensive violence within the visual culture of this tradition. A series of murals on the wall of Rex Bar in Belfast celebrate female resistance to Home Rule. One depicts a Protestant farmer’s wife guarding her husband from attack from across the border. She is masked and armed, safeguarding both Protestant agriculture and the union through her defence of her husband. Unionist women were also active at various locations during the Ulster Worker’s Council Strike of 1974, participating alongside male colleagues to articulate dissatisfaction with the Sunningdale Agreement. A 2004 mural at Lincoln Court in Derry features the text ‘the executive collapses’ alongside triumphant and smiling women’s faces.

Despite a preoccupation with physical force themes in murals, and a ‘virtual invisibility’ of female actors within the political sphere, some murals do address female politicians.[1] These are almost wholly negative, furthering nationalist vilification of Margaret Thatcher or commenting on more recent issues such as Theresa Villiers’ refusal to order further investigation into the 1971 Ballymurphy massacre, or Arlene Foster’s involvement in the Renewable Health Incentive scheme.

The end of conflict produces an opportunity for expression of subaltern views, as well as more struggle over past meaning. The back of the Free Derry Corner wall is a highly flexible space that has been used to highlight different issues.  These have ranged from anti-war themes and health awareness to racism and women’s rights. Some of the murals that engage most explicitly with feminist themes are in Protestant or Unionist areas. A 2015 mural by the Lower Shankill Women’s group resembles a patchwork quilt of words relating to women and the roles they play within their families and their community. In collaboration with artist Lesley Cherry, this mural replaced a contentious paramilitary artwork depicting the burning of Protestant homes at the beginning of the ‘Troubles’.  Public art has also been used as a medium to express pro-choice views amidst the abortion debate in Northern Ireland.

Though the visual culture of murals has continued to diversify, many issues pertinent to women and their history are omitted. Female reform movements such as the Homeless Citizens League are not included in this commemorative medium, whilst the Ulster Women’s Unionist Council, the largest political movement of women in Ireland’s history, is similarly overlooked. No murals explore the impact of the conflict on women. The material impact of maintaining domestic life in ‘Troubles’ context meant women in Northern Ireland were reported to consume more tranquillisers than elsewhere in the UK.[1] The matter of violence against women is similarly evaded. While women have been gradually inserted into this medium, the way they are represented remains specific and gendered, often reinforcing dominant political narratives.

When women are included and represented in the commemorative process, the cycle of re-enactment central to traumatic memory is interrupted, facilitating access to a greater range of identities and understandings outside of the ethno-nationalist binary. This is a process already in motion. An increased number of female muralists post-conflict has resulted in works such as Rita Duffy’s ‘Banquet’ (2011), which celebrates female fellowship.

In a similar way, adopting a gendered analysis of murals disrupts a monolithic perspective of memorialisation by challenging the valorisation of male-perpetrated violence in Northern Ireland. The primacy of ethnonationalist identities in Northern Ireland has suppressed recognition of identities as plural and pushed gender research further to the margins. Gendered themes benefit our study and understanding of the ‘Troubles’ by offering an alternative to sectarianism and complicating a narrative that is often reduced to a dichotomy between two nations or communities. This also reveals how memorials have propagated gendered roles for men and women in the national project, as murals function as emblematic sites of representation. Both loyalist and republican muralists have carefully commemorated women who serve their respective narratives, whilst overlooking those that go against the grain. The continued contestation of these meanings offers a forum through which these ideals might be challenged.

[1]  Photographs and information on all of the murals referenced in this post can be found at extramuralactivity.com, the Claremont College’s digital library and the Peter Moloney collection

Abigail Fletcher is an incoming PhD student at the University of Edinburgh, where her research examines homosexuality in Northern Ireland 1921-1982. Her doctoral project is supervised by Professor Enda Delaney and Dr Gayle Davis and is supported by the Justin Arbuthnott Scholarship in Modern Irish History.  She received her first-class BA History from Magdalen College, Oxford and is currently undertaking research for her MA Dissertation at Queen’s University Belfast, which examines gender-based peace activism in Northern Ireland 1969-1995. You can follow her on Twitter @AbigailF4632

4 thoughts on “Murals, gender and memory in Northern Ireland”