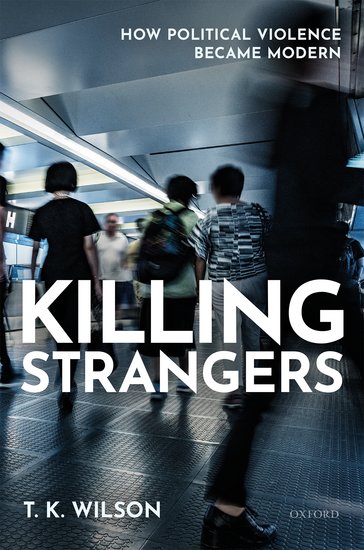 My new book Killing Strangers sets itself a simple exam question to answer: How have forms of political violence changed over time? In answering that question, it attempts to link the changing ‘repertoires’ of protest violence with deeper processes of modernisation. Its arena is Western Europe and North America; its timespan, the late 18th century up to the present day. It argues that the ‘societies of hyper-order’ that emerged in these global regions pushed political violence into niche ‘hit-and-run’ forms; but that this process of containment has also been disturbingly offset by emerging opportunities to cause mayhem in unprecedented ways. Its claim to novelty is perhaps primarily methodological: Killing Strangers deliberately does not define a category of analysis such as terrorism and then try to reverse-engineer a genealogy for it. Rather, it attempts to trace the evolution of political violence through its deeds, and not through its attendant propaganda. As such, the book can be characterised as a sort of ‘history-of-terrorism-that-dare-not-speak-the-name’.

Killing Strangers is not, then, a book that is primarily about Ireland. But Irish violence is frequently discussed within its pages, if only because I found it such a convenient storehouse of examples. Born in 1971, the ‘Troubles’ were the faint (but ever-present) mood music to my English upbringing: during the Hunger Strikes of 1981 I remember being fascinated by a photograph of a child rioter about my age on the front-page of The Times. The thought crossed my young mind that West Belfast must be a very different kind of society to that of West Cambridge where I was living.

I was right about that much, at least. Much later – in the mid-1990s – I was to move to the Belfast area and came briefly to run an afterschools club in Newtownabbey: hardly a standard career path for an Oxford graduate. There I saw my role as listening (and drinking) a lot and judging little. Eventually, the penny dropped that perhaps I should return to the university world to study this type of divided society more academically. A crazily ambitious doctoral project then followed: a comparison of grassroots patterns of violence across the German-Polish borderlands and (nine-county) Ulster in the years after the First World War. Still later I was to find myself working as an ‘Irish historian’: as an Englishman who happened to have become an historian of political violence I pleaded the excuse that I found the relative stability of so much English history really rather soporifically dull.

How have such experiences informed both the writing of Killing Strangers and my own view of the dynamics of the Northern Irish conflict? At one level my conclusions are resplendently banal: Ireland simply demonstrates the power of mass nationalism to disrupt projects of long-term state-building. The power of the modern western state is inherently infrastructural – it exerts its control through society, and not just over it. Only nationalism can counter the state’s tentacular reach through a project of building its own counter-state. Even there, though, the infrastructural power of the British state in Northern Ireland should not be under-estimated – indeed, Gerry Bradley’s memoir Insider depicts a relentless attritional process by which the Provisional IRA in Belfast was slowly boxed in over the course of the ‘Troubles’. Indeed the British state in Northern Ireland is weak for quite different reasons: ultimately, because it rests upon the deep sands of English indifference.

More specifically, Killing Strangers has forced me to think further about the bewildering nature of sectarian violence. Back in April 1975 – in the wake of the UVF’s bombing of the Strand Bar – Cardinal Conway, as head of the Catholic Church in Ireland, issued a statement condemning ‘this ghastly campaign of sectarian murders’. It commented simply: ‘We find it hard to understand why in so many assessments of the situation it is virtually ignored’. Remarkably, that indictment still bites. Sectarian violence is still relatively rarely seen as a complex phenomenon that demands careful analysis in its own right: a striking structural weakness in the foundations of the now towering academic literature on the Northern Irish conflict.

At root, this aversion to studying sectarian violence seems to have something to do with a persistent assumption that it somehow represents a symptom of a failed, or incomplete, process of modernisation in the region. There is more than a hint of liberal condescension here – targeting along (even nominal) religious lines is abhorrent to dominant liberal sensibilities: therefore it is tempting to see such practices as evidence of unchanging atavism. A more grassroots approach that focuses upon the long evolution of tactics suggests a very different story. Sectarian violence as portrayed in William Carleton’s classic early 19th century account ‘The Party Fight and the Funeral’ is (very literally) a parochial affair. Its protagonists are well known to each other personally: and its stage is the local fair. A toxic intimacy is its hallmark.

By contrast, the ‘travelling gunman’ of the Northern Irish ‘Troubles’ is a terrifyingly unknown and unpredictable visitor. Such a figure only emerged in the 20th century – the first reference to a drive-by shooting that I have found occurred in a race riot in St Louis, USA, in 1917. Here the deeper point is that such atrocity is intrinsically modern. It is modern in a very direct sense, simply because it depends upon the prior emergence of a society of mass vehicle ownership.  But its deeper ‘quality’ is also modern because the threat it casts is so impersonal and – potentially – ubiquitous. No one can feel safe. Such generalised nightmares belong only to societies that are already highly mobile and anonymously urban. We should be careful, then, not to collapse the distance between the faction fight and the drive-by shooting. The latter’s horror is authentically of our own times and civilisation. Indeed, it is a paradigmatic example of the Killing Strangers of the book’s title.

This last reflection in turn prompts a couple of final thoughts on the specific challenge of writing about the violence of the Northern Irish ‘Troubles’. Northern Ireland may indeed be something of ‘A Place Apart’ when viewed against the wider geo-political backdrop of Western Europe. But any automatic presumption of exceptionalism always risks solipsistic indulgence. Like Dostoevsky’s unfamily families, every conflict is idiosyncratic in its specific miseries. Arguably, we need more grassroots comparisons with – broadly analogous  – divided societies. Like the ‘Spot the Difference’ exercises in a child’s puzzle magazine, putting Northern Ireland alongside other trouble spots helps identify what was truly unique about its ‘Troubles’; and what not.

Secondly, we could use a combination of what political scientists call ‘longitudinal’ (i.e. long-term) perspectives with the more fine-grained ethnographic detail found in the recent writings of, say, Gareth Mulvenna. What was truly new about sectarian violence in Belfast in the early 1970s? And what was not? Many of the same trouble spots and practices of identifying victims for sectarian targeting simply seem to re-emerge from a 50-year period of dormition. Yet some atrocities were indeed genuinely novel. No one seems to have predicted the emergence of a phenomenon like the Shankill Butchers.

We need to steel ourselves to look at such horrors squarely if we are to stand any chance of decoding their wider social resonance. Killing strangers is often strange killing. But that does not in itself make it ‘mindless’. If we wish to understand it better, we must up our game. An analytical approach that consciously rejected the easy resort to adjectival intensifiers (‘raw sectarianism’, ‘naked sectarianism’ etc) might not be the worst place to start.

Dr Tim Wilson’s research interests and media appearances range widely over the past, present and future of terrorism and political violence. He is especially interested in why such horrors take the particular forms that they do. His first book Frontiers of Violence – an ambitious comparison of violence in the contested borderlands of Ulster and Upper Silesia between 1918 and 1922  – was nominated for the Royal Historical Society’s prestigious Whitfield Prize in 2010. Killing Strangers: How Political Violence Became Modern appeared in September 2020. Both were published by Oxford University Press. He assumed the Directorship of CSTPV in September 2016.