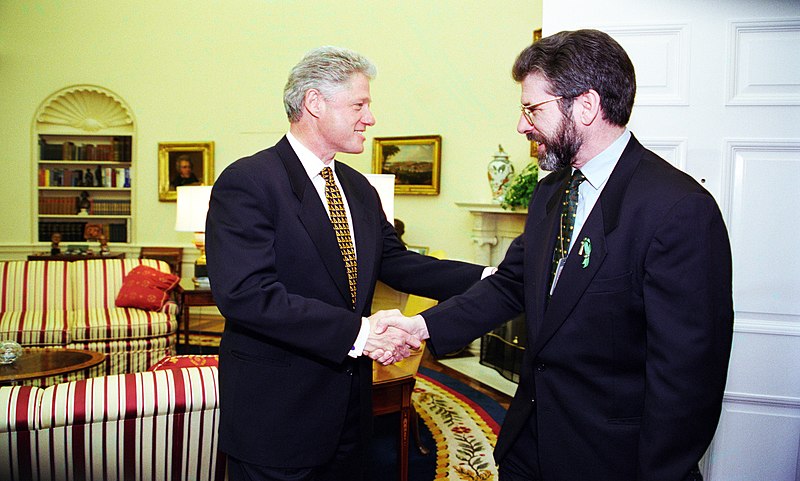 On March 12, 1996, Gerry Adams spoke at a “Rally for Peace” in New York. The event was sponsored by influential Irish American organizations such as the Ancient Order of Hibernians (AOH) and Irish Northern Aid (Noraid). While at the rally, Adams was confronted by a member of the Irish Lesbian and Gay Organization (ILGO) who boldly asked him a question that was on the Irish American community’s mind: Will he be marching in the city’s St Patrick’s Day Parade that year? Since its formation in 1990, the New York based LGBTQ group had been turning heads. For some, it was shocking to see people embodying two assumed contradictory identities: being gay and being Irish. ILGO had become known for their homophobic exclusion from New York City’s St. Patrick’s Day Parade and their subsequent fight for inclusion. The organization had called for a boycott of the parade, particularly among prominent guests of honor. In response to ILGO, Adams quoted the 1916 Easter Proclamation and called on Irish America to “cherish all of the children of the nation” (presumably the queer ones as well).[1] In a timid defense of ILGO, Adams spoke of his own marginalization as a Catholic from Belfast as well as his exclusion from the ongoing peace talks. Adams stated, “as someone who has been excluded from many places, I would like to think we’re big enough to be inclusive.”[2] On Saturday March 16, 1996, against ILGO’s call to boycott, Adams marched.

One week after Adams broke the boycott in New York, Sinn Féin published “Moving On”, the party’s new platform on Lesbian, Gay and Bisexual rights in Ireland. In the document, Sinn Féin committed to supporting gay rights campaigns both at home and abroad, including by joining in with protests. On the pages of An Phoblacht, one party columnist stated, “it is not enough to adopt this document. We need to absorb the arguments […] and implement them.”[3] The new policy document left ILGO wondering if “perhaps the Sinn Féin vision is confined to Ireland.”[4] ILGO questioned “[…] what kind of republicans would align themselves with the most right-wing element of Irish-America? What kind of republicanism is it that energetically promotes the philosophy of inclusion on one side of the Atlantic but flies in the face of it on the other?”[5]

As Melissa Baird demonstrated in her recent Writing the “Troubles” article, republican approaches to solidarity, activism, and allyship were often rife with tension and contradiction, particularly in the US. While at times appearing inconsistent or even hypocritical, the republican movement was fueled by a tough pragmatism where the ends were seen to justify the means. In the late 1980s and early 1990s, Sinn Féin, Noraid, and other republican groups were closer to political power than ever before. Now on the road towards peace in Northern Ireland, Sinn Féin and their US republican affiliates needed to expand their support base, but doing that – in two different political scenarios, in two different cultural climates, three thousand miles apart – meant adapting to each situation, organization, and population as it came.  This proved a challenge for the so-called “New” Sinn Féin, who encountered difficulties navigating progressive networks on American soil.

Agnés Maillot and Martyn Frampton have documented the emergence of the “New” Sinn Féin in their respective seminal works.[6]  Referring to the period following the 1981 hunger strikes where the party abandoned abstentionism and entered electoral politics, the “New” Sinn Féin was increasingly progressive in its political platform and solidarity network. In Ireland this included working with trade unionists, women’s groups, and anti-imperialist gay groups such as Gays Against Imperialism (GAI). GAI’s founders, Charles Kerrigan and Michael Quinlin, along with other influential queer activists such as Kieran Rose of the Gay and Lesbian Equality Network (GLEN) interacted with, worked with, and wrote for Sinn Féin.

As Sinn Féin moved into the 1990s, the party was more vocal in supporting LGBTQ issues. A major turning point came in 1991 when H-Block prisoner Brendí McClenaghan wrote his account of being both republican and gay on the pages of An Glór Gafa/The Captive Voice, a periodical for writings by Irish ‘POWs’ that was distributed by Sinn Féin. Titled “Invisible Comrades: Gays and Lesbians in the Struggle,” McClenaghan’s bold article opened up discussion to what he described as the intersectional struggle faced by gay republicans: colonialism and homophobia. If McClenaghan’s article was a “direct challenge to the conservative republican values of the past,” then Sinn Féin’s decision not to run the article in the American edition of An Glór Gafa/The Captive Voice foreshadowed their rocky relationship with republicanism, gay rights, and Irish America in the future.[7] In a telling editorial decision that encapsulated Sinn Féin’s ambivalence about their progressive agenda in the US, McClenaghan’s article was replaced with an article of Adams pleading for American funds.[8] To gain Irish America, Sinn Féin was quite literally willing to sell out their gay comrades.

Simultaneously, Noraid was undergoing internal changes to fall further in line with Sinn Féin in Ireland. In 1988, the Sinn Féin Report on Irish American Organizations and Political Involvement stated that Noraid needed to do more “outreach to the vast human rights/progressive constituency” abroad.[9] While Sinn Féin was pushing for progressive alliances in the US (with subtle hints pointing towards the gay community), prominent Irish Americans such as Congressman Peter King were heeding Noraid to treat these new alliances with the utmost care.  Fearful of alienating prominent segments of Irish America, still largely defined as Catholic and conservative, slowly emerging from an anti-leftist American Cold War context, King warned “extreme caution must be exercised […] Pragmatism in the extreme is required to forge alliances in the US.”[10]

ILGO, despite being an educated, young, enthusiastic, organization with nationalist sympathies, proved to be a controversial ally for the republican movement. The organization was particularly vexing to older generations of Irish Americans due to their “vocal,” “def[iant],” and “outspoken” activism in New York on issues regarding sexuality and the widely beloved St. Patrick’s Day Parade.[11] To further compound the hostility of many Irish Americans towards the organization, ILGO and the AIDS Coalition to Unleash Power (ACT-UP) were frequently conflated, which proved problematic as many Irish Americans remained angered by the “die-in” at ACT-UP’s “Stop the Church” protest at St. Patrick’s Cathedral in 1989.

Despite this, prominent Irish Americans, particularly those involved in nationalist networks, such as Charles “Joe” Hynes, Paul O’Dwyer, and Séan Mackin, pushed for ILGO’s inclusion in the parade. With numerous groups threatening to pull out of the parade and the Church’s call to boycott, however, these prominent players could not risk the loss of exposure for the Irish cause during the parade. ILGO, and gay rights, were subordinated to the needs of the republican movement and the cause of a United Ireland.

Sinn Féin, ILGO, and gay rights had shared a relatively positive relationship in the early nineties,however. Early in the AOH/ILGO parade struggle, Sinn Féin criticized the AOH in An Phoblacht as an organization now “led by […] extremists.”[12] Gay rights activists such as Kieran Rose praised Sinn Féin’s defense of ILGO. The party went on to call for the decriminalization of homosexuality, march in and fund pride parades, and participate in World AIDS Day events. Perhaps most surprising was when Sinn Féin’s Danny Morrison released his 1994 book On the Back of the Swallow, a novel based around gay romance. Morrison stated he wrote the book from the desire to “defend an oppressed minority” in a “deeply homophobic” society.[13] ILGO reciprocated Sinn Féin’s efforts by using their platforms in America to promote nationalist interests, such as bringing awareness to current events in Northern Ireland, and to express their anger as “Irish lesbians and gay men […] that Gerry Adams has been denied his place in the process […]”.[14]

1996, however, was a momentous year for Sinn Féin. President Bill Clinton had renewed Adam’s three-month American visa for St. Patrick’s Day, but his mid-March visit would be complicated by the fact that on February 9, 1996, the IRA broke their seventeen-month ceasefire, a condition of Adams’ and Sinn Féin’s participation in the peace talks set to resume June of that year. In the wake of the London Docklands bombing, the tide towards Adams changed in Irish America. No longer granted luxuries of big fundraising events or Presidential handshakes, Adams was given the cold shoulder from the very establishment he was there to impress and fundraise upon. After being denied a White House visit on St. Patrick’s Day, it was clear Adams must go to his next best choice: New York. Adams stated, “I would love to be in the White House with David Trimble, drowning in shamrock […] But I shall be here in New York with all of you, among friends.”[15] After being all but ousted from the upper echelons of Irish American political and cultural society, Adams would have no choice but to march. Adams needed a show of grassroots support and after all, “goodwill for his cause [was] never greater than on this day.”[16] On March 16, 1996, Adams stepped out in a grey suit, green tie, and green lapel ribbon as he waved to “tens of thousands” cheering spectators yelling “Get the job done Gerry” and waving tricolor flags.[17]

Adams and Sinn Féin got what they needed, a show of popular support, but they lost allies and turned their back on the values they were espousing in Ireland during the process. This parade dispute demonstrated that for Irish republicans in Irish America, pragmatism ultimately outweighed progressivism, and it would be many years later until members of the Irish LGBTQ community could openly march in the Manhattan St. Patrick’s Day Parade. While it is likely some genuinely supported ILGO’s inclusion in the parade, for the republican movement ultimately the ends justified the means. The parade was too big an opportunity for Adams to squander, and in the wake of the Docklands bombing, not a single opportunity for winning over hearts and minds could be lost. Adams felt compelled to march. To this day, however, Adams remains very mum in his autobiographical work about that March 1996 trip and the parade more specifically, stating in 2005, “It was a great day. For some, it had even more profound consequences.”[18]

Studying the interactions between organizations like Sinn Féin, Noraid, and ILGO, we see that no organization or community constitutes a political monolith. ILGO was a group most widely known for their advocacy of gay rights but also proved sympathetic and active on issues regarding Irish nationalism. Simultaneously, while many Irish Americans, more specifically republicans and nationalists, proved homophobic and hostile to ILGO, others genuinely supported what they saw as a shared struggle. The complexity of Sinn Féin’s interactions with ILGO and the gay community more broadly reveal much about the complex dynamics behind politics and peacebuilding towards the end of the “Troubles” conflict. While readily espousing a doctrine of equality on one side of the Atlantic, they did not commit to it on the other. When it came to the “New” Sinn Féin and its relationship to ILGO and gay rights, Irish American republicans and Adams took Congressman King’s advice: “pragmatism in the extreme is required to forge alliances in the US.”[19]

Samantha Haddad graduated from Mount Holyoke College in 2019 with a degree in History and Art History and from New York University in 2021 with a Master’s in Irish and Irish American Studies with a specialization in the history of women, gender, and sexuality. Samantha’s academic interest is in how activism surrounding gender and sexuality engaged with republicanism during the ‘Troubles’, and how Sinn Féin contends with these social movements in both Ireland and the United States. You can follow Sam on twitter at @samreneehaddad or contact her at srh514@nyu.edu.